We all have dreams for our kids. They are usually big dreams involving their academic success, their career choices, their long term future. I have a smaller one as well. I want my girls to really like to cook. I want them to be able to open the fridge, see what's there and rustle something up. I want them to have that kind of confidence in their ability to create delicious magic. It seems to me that cooking is a life skill not just because our bodies need food, but because our souls do too.

Now I really want to say that for me bowl food is soul food, but it seems kinda obvious and kinda corny so I am going to move on. It's true though - there is something immensely satisfying at digging into a healthy bowl of flavours and textures. Usually the idea intimidates me because it seems like too much work. Then recently my older one made me realized it isn't hard at all. She is 100% the inspiration behind this 25-Minute Jerk Fish Bowl and I loved how hands on both the girls were as we cooked it.

I will be entirely honest and say the process was not intimidating because we had some delicious help along the way thanks to Grace Foods amazing line of products! They made putting this bowl together a breeze and took the stress out of cooking. My initial plan was to make a dressing for the lima beans, but when we tasted them we decided that they are pretty delicious on their own!

The kids tasted the Grace Foods marinades, smeared it on, chopped some veggies, and even partook in eating quinoa straight from the pot! Grace Foods is also giving away Cooking with Kids Survival Kits. Click on this link to check them out and see if you can spot me on the page!

I can't wait to share more of these bowl recipes with you and I promise that they'll be delicious, big on flavour, texture and so much fun to eat!

What goes in a Bowl?

Now this can seem like a lot of work, but by using some smart fixes and some of my favourite Grace Foods ingredients it was a cinch to put together! Pro Mama tip: Have the kids taste as you go so they get really into it!

Let me talk to you through this Jerk Fish bowl in 25-minute style so you can see how to make it from start to finish in under half an hour!

Before anything else put water to boil. Then take your tasty Grace foods Jerk marinade (we used the mild one!) and spread a spoon full over each fillet. Now take your boiling water and pour it into a pot with a convenient stock cube/concentrate. Add the quinoa, bring it to a boil, set your pot on simmer and a timer for 20 minutes.

Now drain your can of butter beans, rinse them and toss them with some chopped red peppers, salt, pepper, olive oil and chopped cilantro.

Take the mayo and whisk in a little water and your favourite hot sauce for a drizzling friendly consistency.

When your quinoa is 8-10 minutes away from being done then heat a skillet to cook your fish. Add a lug of oil and put the fillets marinade side down in the pan. Let is cook on medium heat for 2-3 minutes, then flip over and cook for another 3-4 minutes or until the fish flakes easily.

As soon as the quinoa is done add some freshly cracked black pepper, a generous squeeze of lime juice and chopped cilantro.

Cut your fish into pieces (or leave it whole) and divvy up among your plates. Add quinoa, your bean mixture, sprinkle over some more cilantro, and drizzle over the sauce. Yum and yum. In under half an hour.

We were done eating by the time it occurred to me some crushed plaintain chips would be a great idea. Maybe next time then!

Tried the recipe? Rate it below! 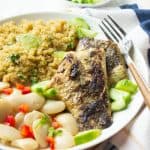 These quantities are perfect for 2 adults and 2 young children, adjust according to what makes sense for you!

Disclaimer: This post is sponsored by Grace Foods but the opinions and recipes are my own!