Do you remember the 2002 Football World Cup? I do. Brazil played Germany, winning 2-0. Do you know what I remember most?

What I remember most is getting up every 2 minutes to make a fresh batch of cookies or whip up another cup of coffee for the people we had over to watch the game. With my father, the ever generous host, if you turn down his offer for tea then you must want green tea. If you turn down his offer for green tea, then you must want coffee. If you want none of the above then it is difficult to process and so the cycle of insistence resumes. After pulling out my fourth tray of chocolate chip cookies and spending an inordinate amount of time "whipping" coffee in a metal spoon with a mug, two cups at a time, my brother Amir had had enough. He loudly announced that everyone was done having coffee and cookies so that I could sit down and watch the game. I don't think my father was impressed, but I was quite relieved.

I was also especially relieved when my practical enterprising mother discovered that you can actually make this coffee with an electric beater/ hand mixer in a larger quantity and just keep it in the fridge. Suddenly that annoying tinging noise of spoon against enamel bowl and the hand cramps were a thing of the past. Now when I know I will need it I whip it up and store it in the fridge, mixing it and tweaking it for guests. That friend who has some coffee in her sugar gets a little extra sugar added in. For myself it's an extra sprinkling of instant and so on.

Now I have struggled a little with what to call this recipe. In my family we always see "phitti hui coffee" which means coffee that has been whipped. In Pakistan you can get often get this drink from machines delightfully marked "expresso", but that is a misnomer as well. Nida, a cousin (and one of the sweetest people I know), suggested Pakistani Latte so I am going with that. Whatever you call it this smooth, sweet drink is the perfect way to combat winter blahs. 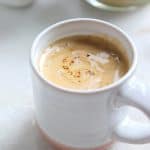 To make this coffee prettier you can scatter some coffee granules over the top, swirling with a toothpick. This mix makes enough for 4-6 large mugs, but can easily be doubled.
« Gobi Gosht - a Meat and Cauliflower Stew for the Soul
Classic Creamy Chocolate Mousse »