Prawn/Shrimp Masala – Shrimp in a Spicy Tomato Base

I’ve been told that my family’s love for food is perhaps not entirely ‘normal’. What do I know – it’s normal for me 😉

I do know though that sometimes we can overdo it like the time my eldest brother and I decided to order food for sehri/suhoor from Barbq Tonite, a Karachi institution and home of some incredibly tasty prawn masala. The prawn masala was not the only dish we ordered – if memory serves correctly it was one of eight of which only the naan and half a kabab were left after the two of us were done with it. In our defense it was Ramadan – we were clearly internally stockpiling food… camel like and all…

I don’t know what it is that makes that prawn masala so good and I suspect I could spend endless hours in the kitchen and never achieve an exact copy, but man this one hits the spot. It is spicy and unctuous with it’s tender yet firm shrimp, the tomatoes that have been softened, but still hold their shape, the traditional karhai flavours slightly muted and loads of bright green cilantro and green chillies. The net result? Finger lickin’ good.

Oh and I usually use shrimp because I always have them handy, but you are welcome to use prawn.

Sprinkle the shrimp with spices, toss gently to coat and set aside. I recommend removing the tails for easier eating, but if you are okay with leaving them on then please do.

Heat oil in a wok style pan or a wide based saucepan at least two inches high and throw in your onions. Saute at medium high heat until the edges brown, now in goes your ginger and garlic and trust your nose. The garlic/ginger will start smelling cooked and then add the dry spices and cook for another two minutes remembering to scrape the sides of the pan. Add a splash of water if it starts to stick/burn. Now throw in your tomatoes and cook until softened. If you were to keep cooking them they would caramelize, but here the softer flavor is nicer. Now add the shrimp, stir it all up, and cook just until the shrimp starts to form a ‘C’ shape. Pull it off the heat, adjust seasoning, then add the green chillies and give it a quick stir. Top with cilantro and a squeeze of lime juice (or lemon) and eat with some roti/naan. 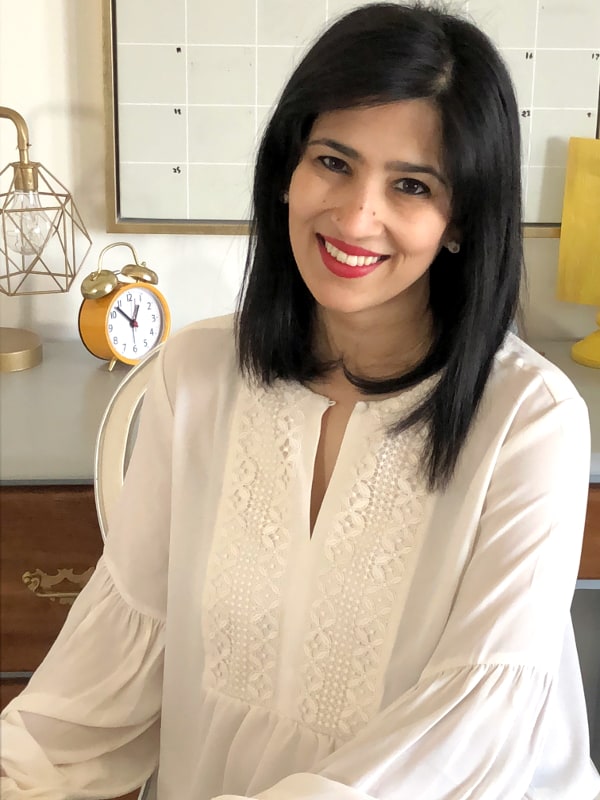 Welcome! I am Sarah, a Pakistani origin Canadian Mama of two little girls. Join me in my kitchen as I cook up the food my family eats and bake up some delicious treats!