Cake meet Milk meet Cream meet Fruit. Could there be a more winning combination? Tres Leches Cake is a classic Mexican dessert that is different from anything else I have had. In it the cake itself literally gets soaked with a milk mixture. Top it with pillowy whipped cream and your favourite fruit and you have a dessert that is both light and indulgent . The Tres Leches cake is traditionally made in a dish and the milks are poured right on top so they absorb in without any spills. I love making them that way for a crowd but for a smaller group I far prefer the prettier round Tres Leches Cake.

It took some fiddling with a recipe that I found in one of my old aunty cooking classes cookbooks, you know the hand written and photocopied kind to get to this one. The cake was perfect as written but the liquid was tricky. Too little and it became a what leches cake and too much and it was a sopping mess. At this amount it is just right (if I do say so myself).

The Components of a Tres Leches Cake

The Tres Leches Cake is made of three parts. The first is a sponge cake which is made without any fat so that the cake is light and airy, perfect for soaking up all that milk. The second part is the three milk filling. The milk filling is a combination of whole milk, evaporated milk and sweetened condensed milk. This mixture gets poured onto the cake. The final element is whipped cream. Traditionally the whipped cream is topped with a dusting of cinnamon. Since I usually use fruit I tend to skip it.

Variations on the Tres Leches Cake

Here are some fun ideas for mixing it up with this Round Tres Leches Cake:

I would be remiss if I didn't take this time to say that when I was putting my strawberries onto the cake I was heavily inspired by this image I saw on Pinterest from. Her strawberry cake looks delicious and I hope to try it one day!

Without further ado here is the recipe for a Round Tres Leches Cake. Hope you love it as much as we do! 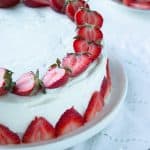 notes: the original recipe did not call for vanilla extract, but I have added it in to help offset any potential eggy flavor which can arise from eggs that are not their freshest.
« Kachay Qeemay Kay Kabab or Galawat Kay Kabab
Herbed Chicken Burgers with a DELISH sauce »