If I close my eyes then I can smell these Kachay Qeemay Kay Kabab. Not the way they smell in my Toronto kitchen, but the way they smelled in my grandmothers hot Karachi kitchen. The uniquely busy stillness of Karachi afternoons, my nani bustling about. The meat mix would sizzle the second it hit the pan and you could just smell that beautiful char forming. It is a smell that is forever etched in my memory, and one of those for which I am so grateful. I am also very grateful that this recipe is not lost the way I thought it was.

You see this is not a "regular" firm kabab. In fact the way my Nani (maternal grandmother) made them they were a paste like mix that you just slid into and flattened in the pan. The story is that these kababs, originally called Galauti Kabab or Galawat ke Kabab, were developed to appease a toothless nawab. He was apparently an enthusiastic foodie who had lost the teeth to chew kababs but not the desire to consume them. The "original" recipe is rumored to have a hundred ingredients or more. but fortunately for all of us our practical forbears adapted it to more manageable amounts.

The key ingredient in these Kachay Qeemay Kay Kabab or Galawat Kay Kabab is the Papaya paste. It gives the kabab it's distinctive texture because it softens the meat entirely. Papaya paste is straightforward to make. You get a papaya, unripe is better, cut, remove the seeds, puree the flesh. It freezes well - my family tends to put it into ice cube trays and transfer the cubes into ziploc bags. It works beautifully in red meat dishes like Kachay Qeemay kay Kabab or even Bihari Boti/Chicken.

If you are unable to get your hands on papaya paste then I am told 2 tbsp of meat tenderizer works too. However, it is apparently a far saltier subsitute so here is what I suggest. Test fry a piece with just the meat tenderizer in it and then add salt accordingly.

The key "technique" if any would be dry roasting. The Besan or chickpea flour gets dry roasted in a frying pan for a nutty toasty flavour. The cumin and coriander seeds also get dry roasted. After they are dry roasted you can grind them in a spice grinder or with a mortar and pestle.

There are two ways to make these kababs. One, which is what I have done here, is to make them a little less soft so you can still shape them for a prettier presentation. However traditionally in my family you would make them so that they are ultra soft. In the first case half a cup of papaya paste is plenty, for the second variety you need the ¾ cup.

If you want to make these kababs ahead of time then simply marinate the mix and put it into ziploc bags in the serving sizes that work for you. Prepping for a dinner party? Put the whole lot in a bag or two. Want to keep it for weekend breakfasts for your family? simply make smaller portions. 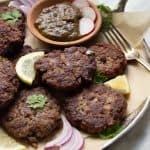 For a kabab you can shape use ½ cup of papaya paste, but for a creamier more paste like kabab increase it to ¾ cup.
« 25 Minute Jerk Fish Bowl - EASY!
Round Tres Leches Cake with Step by Step Video »