4.67 from 27 votes
Jump to Recipe Print Recipe
Jump to the Aloo Keema Recipe, check out the tips right above it though!

Whenever I am about to go back to Karachi my mother always asks me what I want to eat when I get home. The answer always is "qeema paratha" which usually prompts my mother to say "you're your fathers' daughter; he also wants qeema all the time". I also do LOVE Keema Chawal (kid friendly too!) and Dum ka Keema so she may be right there.

It is true. I regularly crave a ghar ka keema. I don't mean bihari style keema, or galawat ka keema or any of those other varieties that are commonly found in restaurants: I mean the kind of keema that mama's make. To say that it has been my nemesis thus far may sound dramatic, but it is true. A Pakistani girl's gotta have Aloo Keema you know.

Ground beef here doesn't taste the same and it certainly doesn't smell the same. In fact some times it smells pretty darn icky. It has taken considerable trial and error and even the occasional chucking of the final product to get me to a place where I am happy with the end result. I don't even keep the achar (pickle) bottle handy any more - God knows a few spoonfuls of it has rescued many bad keemas!

Made my Pakistani Aaloo Keema!? Then do rate the recipe and share your thoughts! Tag me in your recreation on instagram too @flourandspiceblog 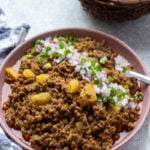 Wanna hang onto this for later? Pin it below!