There is this expression in Urdu, "aapis mein milne se mohabbat barhti hai." Roughly translated the more you meet someone the more you care about them. I never gave this axiom much thought until we made our second trip to Chicago in 6 weeks. Minutes after getting to my aunts house my little one was sitting on the couch chatting away with a cousins teenage son. When I went up to her she said "excuse me, we are having some us time" and shooed me away. 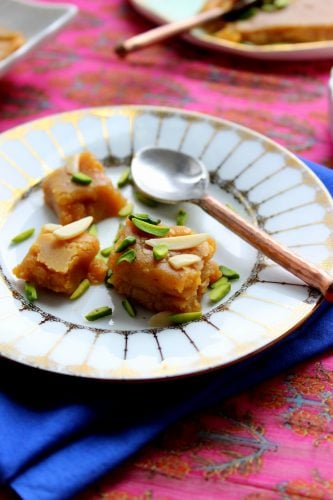 I was amused at the time, but now I find myself thinking how wonderful it is that she is so fond of a boy that I basically did not see for well over a decade. Our recent trips to Chicago have connected the kids, and me too frankly, to a part of our family that I hadn't seen a lot of in the last few years. As a child I took certain relationships for granted, but now when my uncle jestingly (I think) scolds me or my cousin lectures me on my choice of blouse or lipstick I find it reassuring more than anything else. There is just so much love there and I think that's the best part about family, the knowledge of unconditional love. You know, unless you're a real tool or something in which case they'll forgive you faster than others anyway.

Chanay ki Daal ka Halwa has been my nemesis for many years in no small part because one of my aunts makes it exceptionally well. After trying a few recipes, I took hers and wasn't as successful as I hoped. So then I took a step back and thought about what it was that made hers special. It was her use of Khoya, a cooked down milk solid that adds creaminess without any overt sweetness. 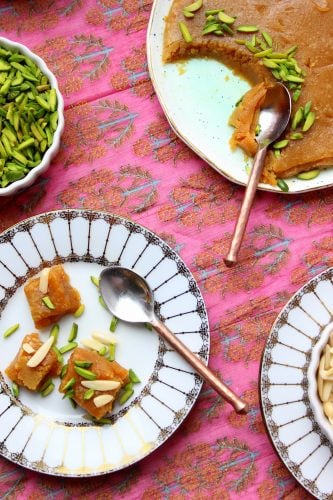 So I went back to the drawing board and made a few changes to the standard Chanay ki Daal ka Halwa recipe. In this version I cook the chanay ki daal in milk until its absolutely tender and then cook the liquid down so I have just enough to make a blendable paste. Not draining the milk from the boiled daal really improved the texture and flavour of the halwa. It also saved me from making Khoya, my previous attempt with a store bought one was disappointing. I also increased both the ghee/butter and sugar in this recipe. Here is why: the sugar in Pakistan is far sweeter than it's Canadian counterpart. Adding sugar and more milk solids meant that I needed more fat to get the right texture hence the increase in ghee. While the pinch of saffron isn't a traditional addition I love what it does for the flavor of the Chanay ki Daal ka Halwa.

Also one of my aunts told me I was stupid not to put it in earlier attempts. 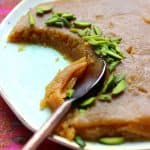 a decadent classic halwa that is irresistible in the winter months!
Author: Sarah Mir

The trick to getting a chanay ki daal ka halwa right is muscle work, keep cooking and keep stirring to get that rich caramelly deliciousness!

Like traditional Pakistani desserts? I have an awesome Coconut Barfi and a classic easy Sheer Khurma here too!