It is always biryani o' clock somewhere. I wish that was my line, but alas it is not although it did ring true when I found myself sitting on my front steps at 10 am a bowl of biryani in my hand. Punjabi Biryani for breakfast? Why not. I have a go to biryani, one that is my aunts recipe and it is pretty damn delicious so I will be honest and say that I never anticipated posting another. When I saw this recipe for Punjabi Biryani on Ainy Cooks, a website that has an impressive collection of Pakistani recipes, I decided it was a must try since it was pretty simple and seemed like a richer flavoured version of my own. I was not disappointed and have made it at least three times since then. 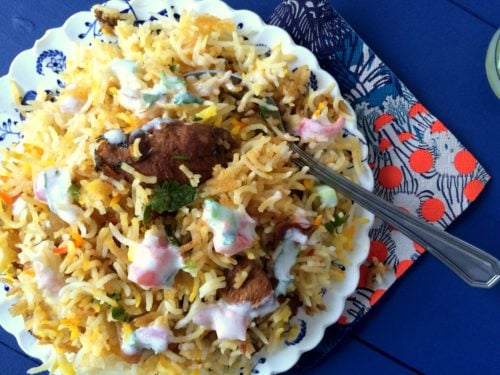 I made some changes to this Pakistani Punjabi Biryani recipe to suit our palate and my convenience (lol), but my favourite addition is the "koylay ka dum" or charcoal smoke. It is a game changer and simple enough to do. In fact my FIL was the one who taught me how.

He was amused and perhaps slightly horrified that I was adding the smoky scent to biryani, but I had very good reason to do so. See once upon a time when I used to work in Karachi one of my colleagues brought the most amazing biryanis for lunch. It became clear that I was helping myself to them a little too much when he showed up with double the amount one day because he had told his family that there was a girl in his office who loved the biryani and ate like a man. Was I embarrassed? Sure. Not enough though to stop said eating like a man. The secret ingredient, the one that made it both addictive and unusual was the charcoal smoke so I added it here. I hope Ainy won't mind my taking this liberty with her mothers Pakistani Punjabi Biryani recipe.

For the Meat Mixture