I am just going to go ahead and say it. Some things make you feel like a Hero. Like you've won at life. Like your family and friends should just get up and give you a standing ovation. Homemade Soft Cinnamon Rolls are right up there. I will be honest and say that I used to be so intimidated by them although I took everyone's recipe who offered me one I never made them. That changed at some point last year and I cycled through some recipes, and this combination is my favorite.

The Cinnamon is nice and strong, but not to the point where it gets that anti septic taste, the cardamom is optional but it adds that lovely roundness to the filling in the same way it does in my Apple Snack Cake. The Cream Cheese Frosting is the PERFECT amount for covering the rolls and having some left for that little extra on each roll. Nothing worse than an under frosted roll am I right?

Okay so let's break it down here and explain how to make these rolls.

Yeast is a living thing. Weird, but true. It's usually made by fermenting something sweet and once you bring it back to life (more on that in a second) it basically 'grows' your dough. Kinda like magic. Even if you don't think the process is magical the smell definitely is.

The process is simple. Pour your warm liquids in a bowl, mix in the sugar, sprinkle your yeast over top. Give it 5-10 minutes depend on the yeast you are using and it'll transform into a foamy substance and then you're ready to move on.

Why You Should ALWAYS Proof Your Yeast First

Now if you are using Active Dry or Instant Yeast you can typically skip this and mix everything together, but I DO NOT recommend that. Here's why: 'stale' yeast will not work, if your milk is boiling hot it'll kill your yeast. You won't know if either of those two things is going to be an issue unless you ferment it first.

After you've kneaded your dough, by hand or in your stand mixer, you put it in a warm place to rise. I like to preheat my oven for 5 minutes, turn it off then put my bowl in there for the dough to rise. Instant Yeast will double in an hour, traditional can take 2-3 depending on a variety of factors. Then you roll it out, smother it in that cinnamon-y sweet butter, roll it up and slice it for another round of proofing. You will end up with the fluffiest beauties and a short bake later your kitchen will smell positively heavenly.

5.) Roll out your dough and make your rolls 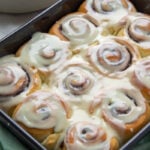