Home » Cake Recipes » The Apple Snack Cake of My Dreams

That sounds like a bit of a grandiose statement doesn't it? It's true though. I think about recipes before I sleep and sometimes in my dreams I can taste what it is that I am trying to make. An Apple Cake has always sounded so appealing to me, an unfussy one that you can bake with the kids or at a moments notice for your evening tea. I have made them before too - ones that were too cinnamon-y, too tough, not enough apple, too much apple and so on and so forth. This Apple Snack Cake is none of those things, it tastes exactly like I dreamt it would.

And yes, I actually dreamt the right combination of ingredients and flavours!

Now as you all may know I am not spice shy. I like cinnamon and have used it in bakes before like this Walnut Crumb Cake. The thing with Apples is that while cinnamon pairs well it can sometimes over power. What I really wanted was to be able to taste the apple itself. To balance the flavours a little this recipe uses half a teaspoon of cinnamon and then something a little different.

Cardamom. ¼ teaspoon of ground cardamom. If you have it, please do add it.

The amount is low and as it bakes that flavour mellows into just another beautiful note in your cake. No one is likely to take a bite and bellow "is that cardamom in there?" Instead you will take a bite of this lovely tender cake with it's well rounded flavours and sigh in that way that makes you never ever want to share it. Folks as many of you know I give away treats often in an attempt to exercise moderation. Never has it been harder than when I gave this cake away.

What Apples Should You Use?

For this cake I used Golden Delicious apples - they are my favourite for baking because they tend to hold their shape and are sweet but not overly so. This is a sweet cake for sure so if you like Granny Smith apples (the decidedly green kind) then you can absolutely make the switch. Keep me posted on how it turns out by commenting below, tagging me on Instagram (@flourandspiceblog) or rating the recipe on the recipe card below. Happy Baking friends! 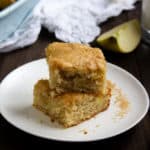 to make buttermilk: measure ½ tbsp of vinegar into a measuring cup, add enough milk to make ½ a cup, let sit for a few minutes. it will look curdled and that's fine!

Don't forget to save the cake for later by pinning it below!