We didn't eat a lot of boneless chicken growing up. When my mother defrosted some it was a pretty clear sign that some awesome Chicken Jalfrezi was coming our way. It is to my siblings what Karahi Chicken is to many other families - the classic easy go to chicken recipe.

This is a lovely homestyle version, it has fantastic flavour, but not the overwhelming 'bazaari' taste of packet masalas. This Easy Chicken Jalfrezi will forever remind of my mother and one of the few that I make almost as well as she does.

This Easy Chicken Jalfrezi is a dish that like my Chicken Masala here starts with an onion base vs a classic Karahi which is decidedly onion free. The ingredient that truly sets Chicken Jalfrezi apart though is Green Pepper or Capsicum. I have to confess at this point that I like the Urdu name - Shimla Mirch - a lot more. More personality you know? I've discussed my love for Shimla Mirch before in this simple sabzi, but every time I add it into a dish I am reminded of it's transfomative effect.

This Easy Chicken Jalfrezi Recipe also has one other distinguishing feature and that is the addition of soy sauce, a traditionally Asian ingredient. The soy sauce adds an umami that can't be beat. I must confess though that we always had ajinomoto in it growing up, but since public opinion has swung against it I don't use it anymore.

How to Make Chicken Jalfrezi - 5 Steps!

Step One: Saute an onion till translucent

Step Three: Mix in tomatoes and spices and simmer covered till chicken is tender and the oil starts to rise to the top

Step Four: Crank up the heat to 'bhunn' the masala or saute it until the oil rises above the masala

Step Five: Add the peppers and finishing touches and cook on low until the green pepper is almost tender.

Made this recipe? Rate it below by clicking the number of stars you'd want to give it! I'd love to see your recreations so don't forget to tag me on Instagram! 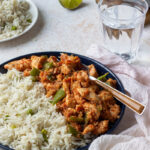