4.94 from 16 votes
Jump to Recipe Print Recipe
Jump to the Pappa Roti Recipe (highly recommend you watch the video above it first!)

Do you know what Pappa Roti is? It is a Malaysian chain that makes coffee buns and a variety of teas. The bun itself has a crisp thin coffee flavored exterior and then right in the middle of that pillowy goodness is a pat of melty butter. I made several batches of these buns last week to get to the right Pappa Roti Recipe.

My love for these buns comes from Karachi trips which always involve multiple trips to Dolmen Mall. For the longest time Pappa Roti was on the main floor of the mall and a regular Jafri hangout. It was one of the things everyone liked to eat and I have spent many hours sitting at those wicker tables and chairs hanging out with the people I love most.

Last weeks Pappa Roti bun obsession was probably fueled largely by the people I was missing not the buns we ate together. It is hardly the thing I should have been baking with Ramadan preps seeming to be the theme of the day, but Bakers Gotta Bake and so two batches of bun and three variations on the coffee topping later here we are -at the Pappa Roti Recipe that gives me straight up JOY.

What Goes in a Pappa Roti Bun?

Here are some things I did with this recipe to make it easier for me.

How do you make this Pappa Roti Recipe?

Step One: Knead dough until it becomes pliable and elastic - 8 minutes on medium high speed. Rest the dough for an hour.

Step Two: Before resting though take out a piece of the dough and wrap it around six pieces of butter, then freeze

Step Four: Divide the risen dough into six pieces and form buns, placing a pat of frozen butter inside each

Step Six: Pipe on the topping and bake! 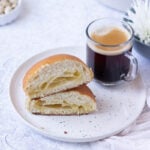 TIP: While you don't have to I always proof my instant yeast first too. That means that before I start baking I sprinkle the yeast over my very warm milk and let it sit for ten minutes. If it starts to look foamy then I know the yeast is working. If you are using regular/traditional yeast then this step is very very important.
« Instant Pot Shami Kabab with Beef Boti
Air Fryer Chicken Drumsticks Recipe with an Easy Marinade »